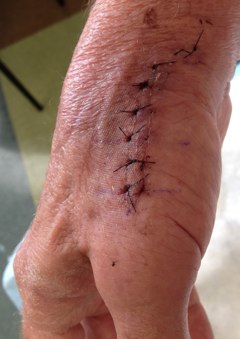 HINT: Stay tuned to the end. After the gratuitous whining, there’s a SO WHAT take home.

I don’t think I even mentioned here my SECOND medical happiness back in October (on top of the hand surgery).

With the cast on my right hand in place, insult to injury, I found myself side lying in a dermatologist office procedure room for over an hour with up to five medical personnel attending, while a basal cell cancer was removed from my neck. (My Alabama days of fishing, swimming and sunburning have come back to haunt me.)

I had a similar lesion removed about 15 years ago, so thought I was prepared for what was to come. I was puzzled why this simple surgery under local anesthesia (five syringes of Lidocaine: I wasn’t prepared for that!) was taking so long. The spot was about the size of a BB.

But when I removed the dressing after my shower the day after, to my surprise, there was a three inch long incision with fifteen stitches (not counting the deeper stitches I was told about during the procedure.

I was not clearly advised to expect such a horror. However, it was the day before Halloween, and this scar WOULD scare small children, so in that, it was well-timed. (Is there a connection between the words scar and scare? Word-sleuthing is not far off!)

My point in writing is to tell you about dealing with the scar–a success story, I’ll venture to say, though I am still early in that process. I thought my experience might be helpful for others concerned with the discomfort of fresh scars (or old ones, for that matter), not to mention the potential of unsightly scars to blemish our otherwise perfect bodies.

My neck scar is perfectly placed for uncomfortable friction against coat collars, scarves, hoods on sweatshirts. For three weeks, it has itched something awful. It is lumpy and red. Lovely. My only “treatment” as instructed by the dermato-folk was friction massage.

Meanwhile, back at the ranch, the cast came off my hand a week ago today. The sequelae of my hand surgery scar is much more aggravating than my neck. Nerve twigs were unavoidably cut, so the top of my thumb (away from the palm) is rather densely numb.

Worse, over the joint where the incision was made, has stung to light touch like it was scalded by hot water. I was about to think I might have some degree of RSD–reflex sympathetic dystrophy–a diagnosis not unfamiliar to those of us in health care dealing with patients with chronic pain issues.

Here’s the rub (so to speak): ScarAway–a silicone-based adhesive “bandaid” that has shown good results against all the negative consequences of a post surgical incision. My dermatologist failed to mention this. My daughter, an occupational therapist, put me onto it, and it arrived from Amazon on Monday.

So I started slapping a three inch piece on my neck, and in truth, it makes it itch worse while its on. I trust the suggested 12 hrs a day/8 week minimum use will have a good affect on the neck scar.

BUT: With the hand, although this scar is minimal, the pain and discomfort has been a major issues. So–DUH–I slapped a piece of ScarAway on my thumb last night before I went to bed. What could it hurt, I figured.

This morning, the redness over the base of my thumb is GONE, and the burning pain is NO MORE! I know it sounds crazy, but a single eight hour use has made an incredible difference — not to say that tying a wet washcloth touched by Elvis over my hand with hopeful expectation might not have done the same thing as a placebo. Don’t care. I’m a believer.

Like acupuncture, the full medical explanation for the efficacy of this topical treatment is yet to be determined. The research, and countless testimonials, are available online. If you or someone you know has scar issues, I highly recommend you check out this product.

I have found no down side or any debunking or urban-legendary nay-saying. Hope if you need this stuff, you’ve learned about it here for the small price of reading my sad story.

Tell your dermatologist to do better follow-up for scar management–like I’m telling mine.

4 Comments on “UnScarred for Life”