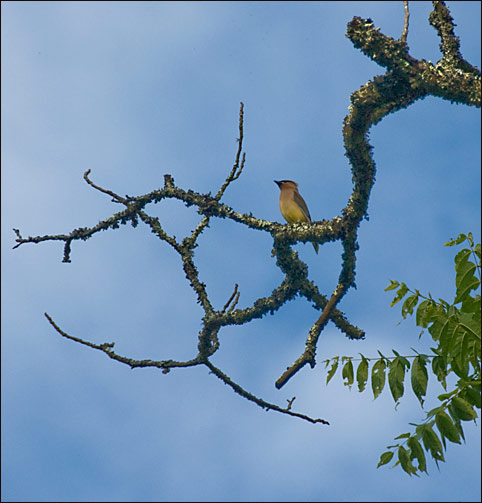 I stepped out the back door with the plastic kitchen waste bucket full of cantaloupe rinds to carry to the compost pile and was struck by the late afternoon lighting. In particular, the old walnut by the barn was fixed in a sidelong orange shaft of late-day sun as if the stage spotlight was giving this tree alone center stage.

And on top of that opportune lighting, the daily cedar waxwings (at least a month earlier than usual) were using the bare branches of the walnut for their out and back sortees for insects on the wing. They usually wait until later when the light has faded.

I had no choice but to slip back inside for my camera, together with the red bucket of “green compost”, I headed down toward the garden, the creek, and the big walnut bird perch.

I’d told myself earlier in the week that I should try to snag one of these sleek, hurried birds on the wing against blue sky and clouds, but realize how unlikely that is now. So I was happy to get one single shot worth keeping before the glory of the sun disappeared for the remainder of the evening behind a sheet of clouds moving south and east.

This is all my 200mm lens will do. The next option for getting a tighter shot would be to put the 2x telextender on the heavy 80-200 Nikon lens and hope my arms and hands have the endurance to hold steady enough for another go at the waxwings should the lighting ever be so agreeable again.

If not, I have this one “studio lighting” shot of this one bird of summer. I’m glad to see them back around this year, and wish them bon appetite as they boomerang from tree to mosquito or cucumber beetle and back again.