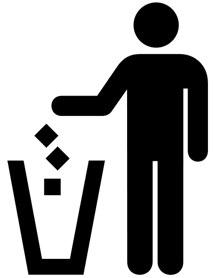 I thought I’d lift this comment up into the potential (if rarely realized) realm of conversation. A reader expressed doubt that, even with the wealth and power of “big ideas” among the earth’s grassroots organizations, little would happen.

His explanation of why: “Big ideas don’t really have a chance at gaining traction when I see that we haven’t been able to stop simple problems such as litter.”

My response with some changes: “Big ideas suffer from the prevailing selfishness that so permeates a dominant political headset these days: it’s all about me, here, now. Litter is the result of too many individuals’ reaction to immediate convenience. Â Rolling down the window and tossing hamburger wrappers—-and especially empty cans of the cheapest beer—-is how they avoid messing up their car, and to hell with anybody else.

They take no ownership of the present-day commons, of others, in other places, in future times. That is not a factor in their thought world, apparently. My faint hope is that the efforts of the thousands of groups—-like SustainFloyd, that Hawkens celebrates– truly will become the Earth’s immune response against that kind of self-serving myopic homo-destructive pettiness.”

And then I wondered: would a study show that the inclination to litter was higher among that certain group of people who hold that the highest good is their own personal freedoms to do whatever they choose, whenever and wherever they choose?

They deny support of a cause that smacks of social justice. Treating other people’s property with respect even though it denies them their personal freedoms, I suppose, seems like restrictive socialism. It prohibits them from having DOMINION over the Earth, and after all, God said we white Christian males were to have dominion, they say.

I am and have been genuinely puzzled by what it is that makes some people take no thought whatsoever before they toss the leavings of a fast food meal onto the side of a Floyd County road. Is this way of thinking we’re now seeing at the national level part of the explanation?

And if their faction wins big, should we prepare for a tsunami of crap on America’s roadsides as a statement of unfettered personal freedom?

4 thoughts on “We Claim the Right to Toss Trash in Your Yard!”