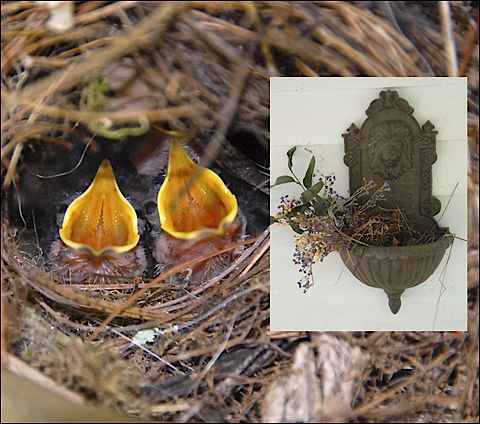 While the front porch, especially now with the nice swing in place, is much the most pleasant sitting porch of our four, we often go out to the side porch by the branch instead for our meals. It’s farther from the road and more private when we’re not in the mood to wave while eating–not that many cars go past during our short sits. And there we were for supper last night, a good hour before dark. It caught her attention and mine at the same instant–a faint, almost inaudibly high frequency sound that pulsed intermittently on and off. We couldn’t imagine what it might be–an insect, maybe. Nor could we tell where it was coming from. It fell silent.When we got up to go inside, there is was again. And on standing up, I could tell the sound was coming from far closer than we had thought, and it seemed to be about ear height. There was only one possibiiity, and it didn’t take much effort then to find the source: peeking over the edge of the cast iron wall thingy (that we use for holding windblown dried flower arrangements by the back door) were two grotesquely gaping orange mouths. At first these open funnels made me think of carnivorous plants–Venus fly traps-like, ready to snap shut on an unsuspecting beetle–but see the beady eyes? (A third baby lurks in the shadows, out-positioned, the B-string that probably gets the leftovers from momma bird. Location location location.)

All it takes is a little commotion (like speaking to each other from our alfresco seats on the porch) to set these hungry babies wheezing their high pitched “feed me!” cries. We don’t see the mother bird doing the deed, but the three got this far, so I suppose our coming and going hasn’t stunted their growth, and I’ll hope for more pictures as they grow feathers and fledge and fly away.