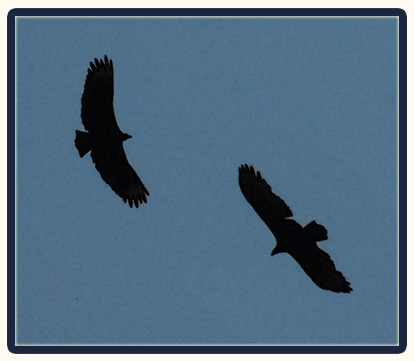 “It couldn’t be ravens, Fred. They don’t winter this far south” a friend once corrected me. But I knew the difference between ravens and other black birds. How could you really mistake them for anything else if you watch and listen. I possessed a pretty tight cluster of identifying features of voice, flight and silhouette. I knew ravens, after all.

But I didn’t know then something I discovered just a few days ago when I took this picture just off the back porch: When ravens fly really close–closer, I suppose, than I’ve ever been to hear–the acoustics of their flight is the antithesis of owl flight.

The owl’s strong suit is stealth. It’s feathers are soft. It’s flight is air on air, so as to not give warning to the wee timorous mousie twitching down below. The raven’s strength is its powerfulÂ  stroke against an arctic wind, then in its strong feathers the rigidity to rest its body weight on outstretched wings and relax–to soar and lift, tuning each feather separately the way a pilot feathers the controls of elements of his fixed imitation of the real and living thing. Raven wings make the sound of helicopter rotors still slow enough to count each revolution, each artificial flap.

The forceful thrust of hard-edged feathers against air not 50 feet overheadÂ  put me on guard. I had no precedent. It spooked the dog, too. We moved into the clearing for a better look. Two ravens flew in close formation with a half-dozen black vultures–black birds whose wings made inaudible turbulence in the same are–all riding a rising mass of unusually warm October air just above the roof of the house.

Against all odds that they would still be there when I rushed back with my camera, I ran and grabbed it. The mixed guild of black birds had move west, nearer the barn, but they were still lower in the sky than is usual for birds looking for loft.Â  Even so, they were by then far too high to hear the rush of raven wings. But I heard it that one time in my life. And now I know one more thing about these black silhouettes against the sky over Goose Creek. I’m one small bit wiser about ravens.

5 Comments on “Wiser, Bird by Bird”