↓ Skip to Main Content
Home › Reflections › The Act of Creation

The Act of Creation 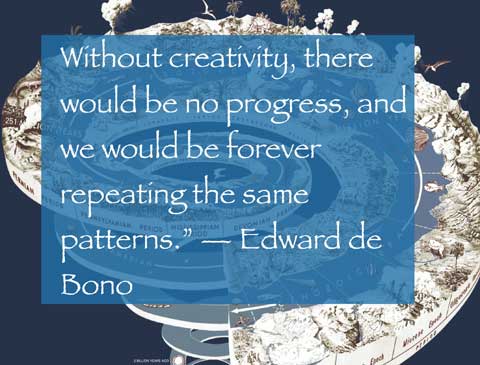 “It was during the Renaissance that creativity was first seen, not as a conduit for the divine, but from the abilities of “great men.” –wikipedia

So I was riffing on this notion that creativity was not even a word until modern times, even while I had been thinking over the past weeks of how different an existence would prevail if “in the beginning” everything had just sat there:Â  If all along there was no progress with modification, no menu to choose from, no “ghost in the machine”;Â  If there was no creative evolution–just inert mindless lifeless stuff forever. What role has Creativity or creativity played in this Grand Story?

So I share this in the comfort of the knowledge that few will read this blathering though they might wonder if I’ve gone off my meds. I blame my hands, without which none of this would have come to light, so to speak. My morning pages here. An exercise. I’ve parsed it as a poem to slow down the reader’s chew-and-swallow, not because it is a poem.

Creativity: that hydrogen at the Big Bang
Did not lie fallow but
went on to form what we now call “the elements”
from which matter, worlds, minds
and hands have taken shape.

Creativity: that carbon, cooling from a molten first world
went on to invent myriad ways to hold hands
with H, O, N, S and P, and from there
to form hundreds of simple amino acids
in the chaos of Earth and space.

Creativity: that amino acids,
since conditions were just right just here
coalesced (a mere 20 of them) into peptide chains
in ways totally random and pointless
until orchestrated and ordered by As, Ts, Cs and Gs
of an acidic double helix seemingly waiting for such a moment.
To fashion cells, tissues, organs and more or less sentient creatures
who would become characters in the further creation of Earth.

Creativity: that out of those ingredients
of hydrogen, carbon, and proteins
a pink pudding became capable
of incrementally thinking into being civilizations,
and to do so even as that lumpy organ,
that warm throbbing bit of microcosm
grew toÂ  know a tatter of the fabric of the macrocosm
from which its matter derived, was created,
they say, from nothing so many parsecs from here and now.

And not content to merely observe,
not content toÂ  simply accept a world as the brain found it,
driven by passion and some would say by that divine spark
that, at the singularity created,
it was humankind, the paragon of animals,
that wielded thought with intention and purpose.
Creativity with forethought and hope, for good or ill,
was wed to the notion of tomorrow,
driven maybe in ways it had always been, by Mind,
to see the world as it could be.
And sometimes but not always, as it should be.

Creativity: to rage against the same old ways,
against the good enough–the insistence over centuries
that what is is not the only or the best
or most meaningful or beautiful way of being;
of going forward.
Not fiat ex nihilo, granted,
but a pretty amazing second-order calling into being.
Some would say it is a form of madness, others of divinity.

So where do we go now?
How do we become the best possible stewards
of our most precious ability
to create, to bring forth order from chaos?
Do we explore and celebrate and nurture,
or smother art and invention with a pillow
Our best selves lost in the cacophony of a bestial dystopia
fashionedÂ  by our passive indifference to the muse
baked into each of us in the beginning?

2 Comments on “The Act of Creation”